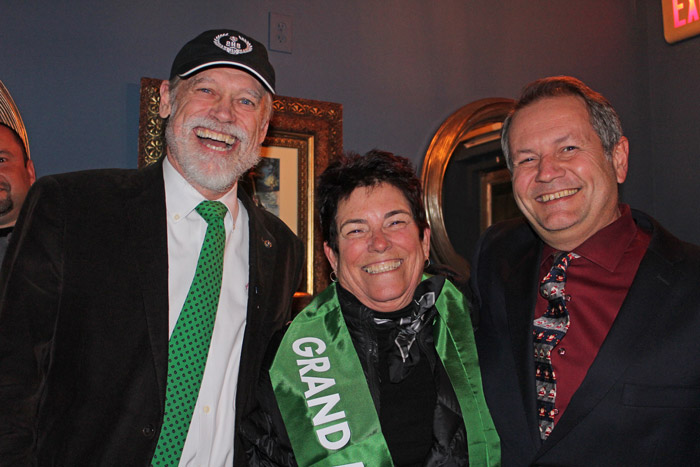 The New Year Starts with a Woman Grand Marshal

But her son Evan called to coax her a second time. He was meeting a friend at Great South Bay Bar. “Please, ma, come. There’s someone who wants to meet you,” he persisted. And besides, Evan said, Tom Keegan wanted her there. So she dutifully showed up.

“Paula, say a few words,” said Keegan after the announcement, as the crowd laughed in the background.

The last woman named grand marshal was Evelyn Cantwell in 1997, a year after Katherine McPeak, who sadly died before the parade. Four couples were named along the way — most recently, Peter and Ann Marie Sarich — but it was a long time since the sole star was a woman.

Murphy is low key and unassuming. You’ll see her wearing a Patchogue Garden Club T-shirt on warm days hauling plants in a wagon with a sidekick. She runs the garden tours and procures speakers, is a Greater Patchogue Chamber beautification chair, who directs the Eloise Staudinger Beautification Fundraiser, coordinates botanical plans with the Business Improvement District and manipulates that green thumb by digging the dirt and planting bright flowers on Main Street, Waverly Avenue, in parking lots behind the Oak Street stores, Patchogue Theatre for the Performing Arts, the Patchogue-Medford Library, the Long Island Rail Road station. She is also on the Cemetery Restoration Committee and is a founding member of the Patchogue Arts Council, helping to provide food for their art receptions and is the committee chair for outdoor art.

“I can say that Paula’s nomination and election was based on her history of volunteerism that makes the community brighter and more beautiful with her efforts,” said village attorney Brian Egan, a former grand marshal himself.  (The Greater Patchogue Foundation St. Patrick’s Day nominating committee is made up of all the past grand marshals. Egan got to lead the parade in 2007.)

Her name came up and the vote was unanimous, he reports.

It was pointed out that Ireland had a tradition of honoring women leaders. They already had two women presidents, Mary Therese Winifred Robinson in 1990 and Mary McAleese in 1997.

“The Irish have a history honoring their wives and mothers; in fact, there were 300 documented women who actively participated in the Irish uprising of 1916,” Egan said.

Overall, the grand marshal bestowment was a big surprise to Murphy.

“You know,” Murphy said reflectively after the Advance interview, “you set out to do things, and all of a sudden there’s this list. And you get awards and you never volunteered to get accolades.”

Her friend Josephine Miller emphasized Murphy just does it and never brags.

“I’m thrilled for Paula to have this,” said Miller. “People don’t realize the amount of work she does; there’s a lot more involved than the actual plantings. There’s a lot of planning, ordering, supervising. And she’s always on the lookout for something she can use to beautify the village. One thing I’m sad about is that Karen [Ferb] — they were so close — isn’t here to see it. She would have been thrilled.” (Ferb, who lived next door to Miller, sadly died this year.)

Murphy moved to the old carriage house she lives in 43 years ago and raised four children, Kilaen, Evan, Regan and Brendan.

Smells from a lemon rosemary cake baked for the Garden Club’s upcoming Holiday House tour wafted through her kitchen on the day of the Advance interview. She grew up in Blue Point at the end of Atlantic Avenue and is the oldest of five girls and four boys. Her dad, John Paul Miller, and uncle, Fred Sherman, started the Davis Park Ferry, then developed the communities there.

“They did whatever came along to take care of their families,” she said of her dad and uncle. “They were clammers, then my dad sold army surplus to farmers out east. And we all were kind of raised off the grid. Everyone had the same responsibilities and didn’t grow up with traditional roles.” The kids all grew vegetables for the table, froze and canned them, so that green, dutiful spark was already started.

When Murphy retired as a middle school teacher after 32 years in the Bayport-Blue Point and Connetquot school districts in 2001, she joined the Patchogue Garden Club. “My brother lives across the street from Josephine Miller. I was introduced to Jo and I needed to do things locally,” she explained. Carl Unger, a neighbor and a big gardener, was on the Beautification Committee, so there was another nearby nudge. She began dragging a wagon with watering hoses and green things with Ferb.

People noticed the difference. “They stopped and said thanks,” Murphy said. “New people to the village, store owners.”

“Paula has been the matron of beautification efforts in Patchogue for nearly 20 years,” said an admiring David Kennedy, the chamber’s executive director. “After Eloise [Staudinger], she’s the one who has kept the spirit alive.”
But as Murphy puts it, what was returned to her was as good as all the efforts made.

“For me, the Garden Club gave me a huge group of friends all based on food and plants, like Josephine and Karen,” she said. “When I retired, I promised I would speak to people every day, get dressed for the day, say nice things to people. I still do that. It’s important to be mindful.”

© 2022 Keegan & Keegan, Ross & Rosner - Suffolk County, Long Island Law Firm - Patchogue & Mattituck
Attorney Advertising Notice: This website - including articles, downloadable brochures and videos,
and other materials - constitutes an advertisement for legal services. The cases and scenarios
discussed in articles and depicted in the firm's television commercials should be viewed with the
knowledge that prior results do not guarantee a similar outcome.
This website is designed and maintained by the PRMG.